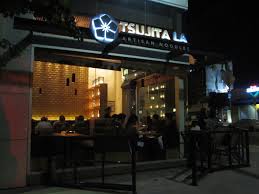 You know that West Los Angeles segment of Sawtelle with its great Japanese nurseries, designer ramen shops, shabu shabu joints and sushi counters? It’s now officially being recognized as “Sawtelle Japantown”. The city of L.A. is posting official signage to that effect today. Maybe it’s not the catchiest name for a great neighborhood, but it’s nice to see the area hold onto its cultural heritage while evolving and staying relevant.

And this strip of Sawtelle is well worth a visit for some of the best Japanese food you can find on the westside, as well as picking up some plants or seedlings from Hashimoto Nursery which has been in business in various forms since 1928. One of the best of the bunch is Tsujita LA’s ramen – but plan on being patient as you wait to get a table for their porky ramen goodness.